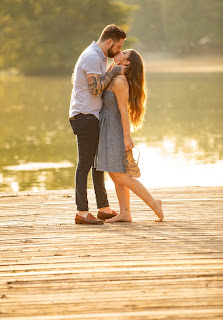 They are getting married at the Payne Corley house in October. They are a really sweet couple who have been together for over 3 years and are deeply in love. They were so thoughtful to each other. The most important thing too was that they knew how to make each other laugh!
We meet early in the morning at Piedmont park for their engagement photo shot. I love Piedmont Park! It is a Atlanta land mark and has so many wonderful places to shoot. You get a lot of variety of photos when you get there

You are the last thought in my mind before I drift off to sleep and the first thought when I wake up each morning. Engagement photos by the Atlanta wedding photographers at AtlatnaArtisticWeddings

The Piedmont Park of today began with the “Cotton States International Exposition of 1895.” The land, purchased from the Gentlemen’s (now Piedmont) Driving Club, was first used for a local event. “The Piedmont Exposition” in 1887 prepared the way for what became a world’s fair.
In 1909, the City elected to transform the decaying fairgrounds into a park and enlisted Olmsted Brothers, pre-eminent landscape architects of the time, (and sons of Frederick Law Olmsted), to develop a master plan for the park. Due to budget limitations, their plan for Piedmont Park was not fully implemented. Nevertheless, the Olmsted Brothers’ 1912 plan greatly influenced the development of Piedmont Park. In fact, the current master plan, adopted by the City of Atlanta and Piedmont Park Conservancy in 1995, honors the brothers’ original vision for the park.
In 1989, unwilling to accept the decline of their beloved park, a small group of concerned citizens and civic leaders joined together to form Piedmont Park Conservancy, a private, nonprofit organization dedicated to the restoration and preservation of Piedmont Park. In 1992, The Conservancy established a Memorandum of Understanding with the City of Atlanta, making official the public–private partnership and mutual goals to rehabilitate and maintain Piedmont Park.
Through the generosity of corporate, foundation and individual contributions, Piedmont Park Conservancy has raised more than $66 million in private funds as it works to complete the Master Plan including the renovation of Oak Hill, Lake Clara Meer and the Meadow. Through its member support, Piedmont Park Conservancy helps to keep Piedmont Park safe, clean and beautiful, and offers a variety of educational programming. Engagement photos by the Atlanta wedding photographers at AtlatnaArtisticWeddings
Devan and Collin were a hoot through out their shoot. I always suggest a engagement photo shoot to get to know the couple. As we walked around the park I got to know the couple. They meet at restaurant while they were in school. They started dating a few years after they meet again. Collin told me it was love at first sight. I just loved the way they looked each other. I could tell they really loved each other very deeply. Engagement photos by the Atlanta wedding photographers at AtlatnaArtisticWeddings
We went all over Piedmont Park and got a lot of variety. We went to the lake Clara Meer and the dock there for some great photos! We also went to Oak hill to get the Atlanta skyline. We also went to Mayors Cove and the Active Oval to get another Atlanta skyline. For a short amount of time we get a lot of locations in for little effort. By shooting in the morning we were done by 9:30 am when most people were starting out.

I read this article, it is really informative one. Your way of writing and making things clear is very impressive. Thanking you for such an informative article. wedding photographer asheville north carolina